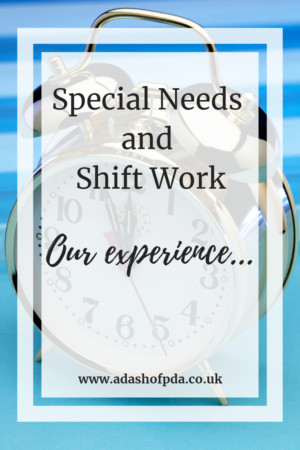 Our life has been somewhat challenging of late.  Special needs and shift work do NOT go together very well.

We finally got an educational placement for our son, one with which even R was happy.  But, as I’m sure a lot of you are already aware, things do not always run smoothly and, if you aren’t aware, this post will fill you in!  It’s nearly Christmas and we are back to school refusal.  He hasn’t attended at all since before half term.  This has left me virtually housebound due to the fact that he finds it almost impossible to leave the house.

It’s so frustrating.  I know that he wants to go but, the reality of it is, he just can’t do it.

Off to a great start….

He started off so well, too well it would seem.  I didn’t spot the signs in time.  The first 2 days he did an hour in the morning.  This was fantastic and so much more than we had hoped for.  However, it took its toll.  When he got home on both days, he went back to bed, where he spent the rest of the day recharging his batteries.  He then couldn’t manage to access the provision on the third day.

Once he was ready, we decided, with his agreement, to reduce his time to just half an hour each day.  During the residential week, he went into school each day for the full half an hour and appeared to have an amazing time.  However, the school was empty.

Since then, we have had major problems.

EHCP is no magic wand…

Our son suffers with severe separation anxiety and autism with demand avoidance traits.  He has an EHCP (Educational Health and Care Plan) which gives very clear guidelines for reintegration into an education placement.  These recommendations take into account the struggles that he faces on a daily basis.

There is a distinct lack of practical knowledge regarding Pathological Demand Avoidance.  Our sons diagnosis cant state PDA as Surrey do not, as yet, actually recognize it hence the Autism with Demand Avoidance Traits diagnosis.  We all got caught up in how well he was doing.  Unfortunately, as is often the case with PDA, what works one day will not necessarily work the next.  He is driven by an anxiety led need to be in control.  Without that control, he experiences panic attacks of varying degrees of severity.

It is my belief that, as we skipped the foundation steps within the EHCP,  he has nothing to build upon.

So…..what are we doing about it?

At home, we are instigating a routine.

We create routines by giving options which allows him some element of control.  It is important that we include him in the decision making to have any element of success.  Without this, his anxiety will take over.

We try and have dinner between 5.00pm and 6.00pm (my time keeping is pretty shocking which does cause issues).  It isn’t unusual for me to do 2, if not 3, different meals.  Once we’ve eaten, quite often our son will disappear to his room as he finds it hard sitting with us.  There is an expectation to socialise which, to him, is a demand and, if he’s sat and eaten with us, we allow him to disappear.

Then the balancing/juggling act begins.  I have to try and get both of them through the bath or shower before bedtime.

If we want him to have any chance of at least a little sleep, we have to keep demands to a minimum.

Between 7.30pm and 8.00pm, I will drop into the conversation that I am going to run him a bath.  I wont enter into any discussions on it, I’ll just get up and do it.  Why do I run it?  Because he has sensory issues and has trouble feeling hot and cold.  By doing it myself, I know that he isn’t going to scald himself which has happened in the past.

Once it is ready, I simply inform him of the fact and just check that he has a towel.  He’s never in the bath long so I don’t need to chase him out, unlike my daughter but that’s another story!

Once he’s out, he will invariable sit on his bed in a towel to dry.  He doesn’t like physically  drying himself as he doesn’t like the feel of the towels rubbing his skin – another sensory issue.

A battle for another day….

A little later, he will phone me to ask for a drink and for us to go and say goodnight.  I can hear your horror at the fact that he calls us but, this is actually an improvement.  He used to just shout downstairs to us until we heard him.  No, phoning us is not ideal but, that is a battle for another day.

When we go up to him, we will say good night and ask if he would like his light on or off.  He will now usually say off which is a definite improvement.  Night time has always been a difficult time for him, even as a baby.  Initially, the hospital insisted that they were kept together in the crib being that they were twins.  This carried on for sometime and then we decided to separate them.  However, as soon as he was able, he would climb out of his cot and into his sisters and this is where he would sleep.

He suffers quite badly from nightmares and night terrors.  I now have a better idea as to what is going on.  All the time he is awake, he is, to an extent, in control of his thoughts.  As soon as he goes to sleep, he is no longer in control and, at the end of the day, no one enjoys bad dreams.

Despite all the challenges, there is a routine, of sorts, in place for the evening.

Mornings are a completely different story

The nightmare of shift work and special needs

My hubby works a rolling 8 day week.  He does 2 days, followed by 2 nights then he has 4 days off.  This has a very dramatic impact on our day but, the worst impact is seen in the morning.

I get up a 6.30 am and it makes no difference whether my hubby is there or not, this doesn’t change.  But, that, at the moment, is the only constant.

My daughter starts school at 8.30 am and finishes at 3.15 pm but, every other Friday she finishes at 2.30 pm.  Most days she cycles, leaving home at between 7.40 am and 7.50 am.  When she has food tech, I take her to school so that she doesn’t have to take everything on her bike.  If she’s not feeling too great or the weather is particularly grim, I might take her as well.

When she cycles,  things aren’t too bad but, if I need to take her, it gets a little stressful.

If my hubby is on days, he should really leave before I can get back from dropping my daughter at school.  This means that, ideally, I need my son to come with me as leaving him at home, alone, is not a very good option.  However, getting him out of bed, dressed and out of the house is, at the moment, near enough impossible.  So, hubby hangs on until I get back and we pray that I don’t get held up.

When hubby is on nights, we don’t have this option.  These mornings are stressful for all of us for very different reasons:

All in all, I think that it’s fair to say that I hate mornings!!!!

Do you find a particular time of the day more difficult?  If so, I’d love to hear about your methods for dealing with it.

Until next time, may your coffee be strong and the chocolate plentiful…….oh…..wait, that’s my dream lol

PS, If you find value in my posts, I’d be very grateful if you would consider sharing them.  I’m passionate about raising awareness for special needs and, in particular, Pathological Demand Avoidance. By sharing my posts you will be helping me to achieve my goal.