What is Pathological Demand Avoidance (PDA)

Pathological Demand Avoidance (PDA) is an extremely controversial subject.  Unfortunately, I  believe that how accepted it is will very much depend on where you live.

Where we live, in Surrey, we may well be able to get a private diagnosis but, whether it would be accepted by the powers that be is another matter and, to be frank, we can’t afford it.  Our son was diagnosed with ASD back in May 2017 and, we were so relieved to get a diagnosis, that we didn’t pay much attention to the little bits of the jigsaw that didn’t fit.

PDA is a behaviour profile within the Autism Spectrum.

Someone with PDA shares the same difficulties as someone with ASD but with one major difference.  They are driven by an anxiety driven need to be in control.  It is the extreme nature of this need that makes it pathological.  A much more detailed description can be found by visiting the PDA section of the National Autistic Society’s website.

What Do We See?

We noticed that things weren’t right when the transition happened to Secondary School.  They employed all the standard ASD strategies, but nothing worked.  He managed 7 days, at the start of year 7, which were fraught with meltdowns and escapes from the school building.  There was shouting, screaming, crying and things were thrown and kicked.  The school couldn’t have done more for us and, had it been a typical case of ASD, I believe that everything would have been OK.  However, it wasn’t.

I can’t actually remember where I first heard the term Pathological Demand Avoidance but, you know what?  That’s really not important.  I did what I always do and went to google.  I started reading and researching and, all of a sudden, things started making way more sense.  The proverbial light bulb moment happened and I began to understand why the ASD strategies weren’t working.

PDA has to be dealt with in a very different manor to ASD.  We found ourselves being told that our son had far too much control, that we needed to take back the control and, in normal circumstances, I would agree.  But, in the case of PDA, you can’t take away the control.  The anxiety that a person with PDA experiences, is so intense and the only way that they can cope is to be in control.  If you just remove the control, the anxiety becomes completely unmanageable.

Following many discussions with his psychologist, a diagnosis of ASD with Demand Avoidance Traits was given.  Isn’t it interesting how a slightly different wording makes all the difference?  This is now included in his EHCP which actually causes different problems but that’s a story for another day.

I thought, following all my research, that I knew quite a bit about PDA.  That was an extremely naive idea.  I was lucky enough to recently attend a course, run by  Side by Side Coaching.  I had so many light bulb moments during this course that I can’t actually count them (maths was never my strong point…..)

It was a full on day of learning and, oh boy, was it amazing.  I’ve already spoken to my husband about the fact that I would like to attend another as I’m sure I’ve missed so much due to brain overload.  It really emphasised how much I didn’t know but, also, how much I actually did know which was interesting.

I think the things that hit home most were the little things.

Who ever knew that asking a simple question and waiting for a response is a demand….  The number of arguments and meltdowns that have happened over what to watch on the TV.  Our son could have been badgering us for weeks about a particular film and, all of a sudden, someone else mentions it and, guess what?  He can’t watch it because someone else made the decision.  Crazy!  But, that’s what its now like in our house. 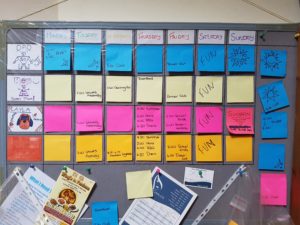 The autistic side craves routine and predictability but the PDA side can’t stand it!  We had a weekly planner in the hallway.  On it were the days of the week, Monday to Sunday, across the top and each of our names down the side.  I religiously filled it in to give routine and consistency.  However, this in itself is a demand.  All the things on there are a demand that he has no control over!  Even the things that you’d expect him to want to do are a demand.  No wonder he kept going into overload!

I follow Sally Cat’s PDA page on facebook and find it a great help as it comes from the prospective of an adult who has PDA.  All the information in the world is no substitute for actual experience.  She has put together this great video called Sally Cat’s Guide to PDA describing living with Pathological Demand Avoidance which is quite eye opening. 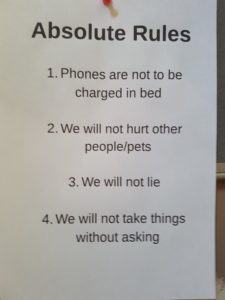 We needed to remove all demands but, there were certain things that we would not compromise on.  We now have 4 Non-Negotiable House Rules.  They apply to all of us.  We do not single out any one person.

Everything else is open to negotiation.

There is so much more to share with you but, for the moment, I feel that this is enough to give you an insight into how we are managing things.  Nothing is perfect and things need to be adapted on a daily basis but, for the moment, we are actually making progress, very small steps, but, you know what?  That is absolutely fine.

Until next time, stay positive.