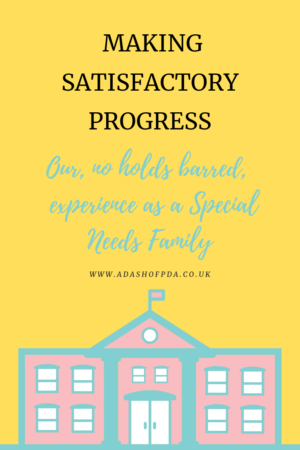 Making satisfactory progress is a really interesting term and, to be honest, I wouldn’t be surprised if this post ruffles a few feathers.

When is progress not enough? In our experience – When the Local Authority and Special Needs are involved and, in particular, Pathological Demand Avoidance!

This may well be a rather inflammatory statement but, it’s exactly how I feel at the moment.

For people that have only just come across my blog, our son is diagnosed with Autism with Demand Avoidance Traits and Anxiety. We are based in Surrey which, unfortunately, means that we have been unable to get a Pathological Demand Avoidance Diagnosis recognized at this current time.

For many years we have battled to get our son assessed as he didn’t present with what were considered the typical autism traits.  We were considered to be awkward parents that were looking for reasons to excuse his “naughty behaviour”.

Oh my were we naive!

We thought that, once we had a diagnosis, our son would get the help that he so desperately craved. Surely a diagnosis would mean that the battle was over?

Nope…… sorry to disillusion you….

The first diagnosis was Autism and we were so relieved to have had our concerns realised that we didn’t question it.

But, doubts began to creep in.  They were tiny at first, the problems, only noticed by us.  Routines are key for people with autism but, whilst they were proving useful, things just didn’t seem right.

Rules also play a huge part in autism but, yet again, things just didn’t quite ring true for a diagnosis of autism.

Whilst there were many similarities, the differences became too much for us to ignore.  The biggest one was that techniques used to help people with autism, were not proving effective for our son!

Enter our friend, and  yours, Google!  You’ve got to love Google.

Following many searches, I stumbled across Pathological Demand Avoidance and this was my Lightbulb moment.

If you haven’t managed to track down great sources of information, let me direct you to some that I’ve found invaluable

All of a sudden, things made sense.

Now, at this point, I would like to say just how grateful I am to our Clinical Psychologist at the time.  CAMHS come under a lot of flack, mainly due to the lack of funding and long waiting lists but, at the time, we were lucky.  Following many discussions, we were able to get the diagnosis amended to Autism with Demand Avoidance Traits.

It was then that it dawned on us…….The journey had only just begun!

At this point, our son was at Junior School.

Up until then, we were being told that there was nothing “wrong” with our son but “he was extremely naughty”!  Now, we had been vindicated

Next, we were told that there was absolutely no way that he would get an EHCP.  As demands increased, school refusal began and it became blatantly obvious that his school was not in a position to be able to meet his needs.  However, no EHCP meant that we had very few options regarding senior school and so he started at the same school as his twin sister.

In total, he managed 7 days of Year 7 and, let it be noted, none of those 7 days were without stress or, for that matter full days.  Attendance of that school ended with him escaping the building and running around the car park extremely upset yet again!

The SENCO were brilliant and they did everything within their limitations to help him but, very quickly, they admitted that they were unable to meet his needs.  It was with disbelief that they listened to us when we informed them that we had been told, in no uncertain terms, that he wouldn’t get an EHCP.

Following an anxiety driven angry explosion, the EHCP process was started and, guess what?  Yep……he now has an EHCP.

Now we embarked on yet another battle.

He was signed as unfit for school, which, to us and him, was a huge relief at the time.  As a parent, you are constantly trying to balance your child’s health against the demands for attendance.  I felt awful that we were even contemplating trying to protect ourselves but, it was of real concern.

Side note: being signed as unfit for school is a stumbling block for finding a provision.  The Local Authority would not progress this all the time he was declared as unfit and so, following many discussions, he was signed as fit again.

Now, the diagnosis which was a huge success for us, then started to cause real problems.  It would appear that most schools, both mainstream and specialist, are not able to meet the needs of a child with a combinations of Demand Avoidance Traits, Anxiety and, in particular, Separation Anxiety.  Surrey is severely lacking in provisions and fundings, as are many areas.

Provision after provision turned us down saying that they couldn’t meet his needs.

During this time, Access 2 Education were sending in a tutor for 2 sessions a week at our home.  But, yet again, the lack of knowledge and experience regarding this diagnosis meant that this soon failed.  He was then supplied with a Mentor instead of a tutor but, yet again, it all went wrong and so, Year 7, was, quite frankly, a complete write off as far as an education was concerned.

Light at the End of the Tunnel

Eventually, we stumbled across a provision that informed us that they would be able to help him.

Failure to closely follow the EHCP guidelines resulted in a complete disaster!  Now, I know that a lot of you will be saying that the EHCP is a legal document and, you are right!  But, when we questioned this, we were informed that the provision did not have the staff to be able to carry out the much needed recommended little steps.

Whilst the provision is fantastic, I am in no way disputing that, the success that they have achieved with other special needs children, speaks volumes, it soon became apparent that there was a distinct lack of experience regarding PDA.

Now, this lack of experience isn’t their fault.  This is, after all, a relatively recent new diagnosis.  But, now we had another problem.

Ok, why this title?

Well, I consider us relatively fortunate.  The provision named on the EHCP, whilst not currently being a success for our son, were keen to work with us to find a solution.

They were able to secure agreement for the funding to go towards Equine Assisted Therapy.  Our son, as with many special needs children, has a real affinity with animals and, in particular, with horses.

It was agreed that the funding would go towards attendance of the Holistic Horse and Pony Centre at which he would receive equine therapy sessions, riding lessons and academic lessons.

He made HUGE progress.

Now, this list is far from exhaustive and, many of you will be able to appreciate how significant these things are.

It is our honest opinion that these significant improvements are due to the Holistic Horse and Pony Centre.

So…where’s the problem I hear you ask?

Well……as far as we are concerned, he has definitely demonstrated making satisfactory progress, I’m sure most of you taking the time to read this post will agree!

Funding for his attendance of the Centre is about to be removed due to the fact that he is NOT making satisfactory progress.

So….. what constitutes making satisfactory progress?  The ability to access a school building!

Everyone involved is in agreement that he has done remarkably well, particularly in attending his lessons while at the Centre.  But, he is now expected to attend school full time from September.

How does our son feel?  Devastated.  All he can see is that he is being rewarded for his progress with the thing that has made it possible being taken away.  Complete ANXIETY OVERLOAD!

I am terrified.  There, I’ve said it.

We are about to go into battle yet again.

Our priority is for our son to be happy and healthy and to receive an education.  If this involves a school building?  Well, quite frankly, we will end up with a boy who will not come out of his room, not through being stubborn but through severe anxiety!

We have already seen a distinct deterioration in him and, to be perfectly honest, it is extremely upsetting.

And so, our journey continues.

PS: By sharing our own experience, I hope that you, my readers, can take comfort in the fact that you are not alone.  I am a mum sharing our life as a special needs family in the hope that it will not only help others but also raise awareness.

Please, help me by sharing this post so that others may also benefit.