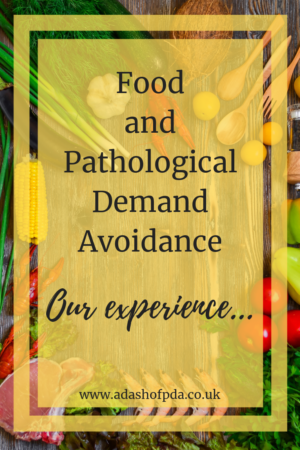 Food – we all need it, we can’t live without it.  But, it provides us, as a family, with so many issues.  Something so basic and fundamental to life as food should be simple…..  However, dealing with food and Pathological Demand Avoidance is far from simple.

I have twins.  A boy and a girl.  Both have been brought up the same way.  Both were weaned in the same way.  We have always believed in healthy eating so I made my own baby foods.  Interestingly, we went to a wedding and, to try and make things easier for us, we bought jars of baby food.  Neither of our kids would eat it – isn’t that interesting…..

For the first few years, things seemed to progress smoothly.  Both my kids would eat anything that was put in front of them.  I considered myself very lucky.  Neither of them had an unhealthy sweet tooth, they would rather have fruit than sweets.  My daughter went to a party and the mum sent me a photo.  She was astounded to see my daughter sat, by herself after everyone else had left the table, eating grapes, carrots and baby tomatoes!  Both of my kids were the same and then, problems began to creep in regarding my son’s eating.

Messy pasta was not tolerated.  I had to put pasta in one bowl and whatever sauce we were having in another.  Then onion had to be left out. Garlic, this devastated me as I love garlic and hate vampires…. but our son couldn’t tolerate the taste.  Courgettes suddenly became the worst thing ever.   Then one dish meals, meals that we often had, wouldn’t be eaten

Things now are quite severe.  He will no longer eat beef, chicken, pork, mince or lamb, but he will eat bacon, beef burgers, chicken nuggets, gammon and, on occasions, fish fingers.  With regards to vegetables, he will now only eat sweetcorn and carrots.  Potatoes have to be chips or what I call chippy tattas which are potatoes cubed and roasted.  Luckily he will still eat grapes, bananas and strawberries but his diet is extremely limited.

Much of this is to do with sensory issues.

When you make a particular dish often enough, you no longer measure out ingredients.  It took us ages to realise that this was a huge problem.  When our son had a dish once, he expected it to be exactly the same next time.  Of course, when you are winging it with your creation, this doesn’t happen.  When you make mash potatoes, they are generally not the same each time, slightly more butter, slightly less milk, more lumps……  All these things have a great sensory impact leading to refusing to eat the dish.

We have come to the realisation that, for our son to eat something, it usually needs to be exactly the same as the last time he had it.  He self regulates this by choosing to eat things that do not need to be “mixed” at home.  For example, chicken nuggets are generally regular in texture and taste.  There isn’t much variance in the same brand of fish finger.  Sweetcorn and carrots do not vary in texture.  These are also “yellow” foods.  Colour also has a huge impact.  If its green, it will not be eaten.

Moving on from the actual food, we also experience sensory issues with regards to cutlery.

Our son was constantly using his fingers.  If we insisted on the proper use of cutlery he would refuse to eat – even if it was his most favourite food in the world.  We then had a lightbulb moment.  It was the feel of the cutlery!  If the cutlery did not feel right in his hands, he couldn’t use it.  This was a revelation.  It was also interesting to note that the feel was different for both hands.

We now have specific cutlery, with large handles, for use at home.  We try to take these with us when we will be eating out, no matter where it is.  As a plan B, I also have some cutlery handle covers that live in my handbag.  These, whilst not perfect, allow him to use different cutlery.

We have to take a cup with us for him to use.   He will not use glasses or cups provided by restaurants etc.  If we have forgotten his cup, he will have to drink from the bottle which limits what he can have.  If we go out for coffee and cake, his drink will be in a to go cup, even if we are eating in.

For our son, so many things are changing and are out of his control.  What he eats is, to an extent, still within his control and, whilst causing us major stress at times, is not a battle to be fought at this current time.  We are now supplementing his diet with multivitamins and we make suggestions regarding drink and food but, we allow him possibly more control than a lot of parents would be happy with.  This, for us, is a coping mechanism.  It enables us to get through the day and fight the battle that is currently the priority.

How do you deal with food and pathological demand avoidance?  I’d love to hear what strategies you use.  Why not let me know in the comments below?

Until next time, stay strong and remember, you are enough.